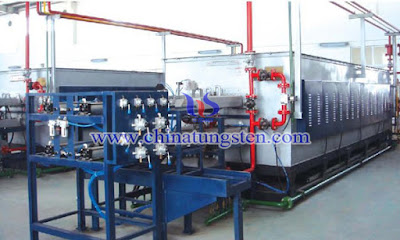 At present, the industrial production of pure tungsten trioxide or APT is mainly purify the crude sodium tungstate solution.

Ammonia purification of a thermal dissociation method is the South China University of Zhang Qixiao et al in the early 21st century proposed purification of ammonium arsenate solution method, it can be achieved by the crude ammonium tungstate solution directly prepared high purity tungsten trioxide.
The use of ammonia purification heat from the main base of high pure tungsten trioxide solution is directly preparing high purity tungstic acid (H2WO4), the quality of H2WO4 directly affects the quality of the final product and cycle times. The process of ammonia purification by thermal dissociation is:
1.The pulp industry H2WO4 slowly adding ammonia, WO4 will dissolve (NH4) 2WO4 solution, and silica, crude H2WO4 of ferric hydroxide, manganese oxide and calcium tungstate are reserved for ammonia dissolution in slag.
2.Filtered (NH4) 2WO4 solution, after heating and removing ammonia, they gradually precipitate the solubility of ammonium paratungstate crystals. 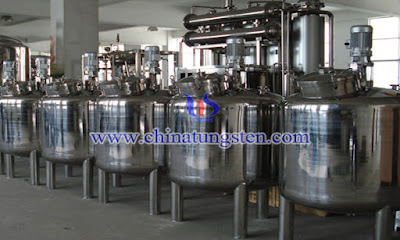 3.The ammonium paratungstate dissolved in ammonia, is in the temperature range of 250-350 °C ammonium paratungstate for a sufficient period of time to make the properties of ammonium paratungstate crystals change, and then can be dissolved in ammonia to produce (NH4) 2WO4 solution. With the progress of the thermal dissociation process, the impurities in the crystallization of ammonium paratungstate were dehydrated and oxidized. Most of the impurities were insoluble in ammonia, and only aluminum, arsenic and phosphorus still entered (NH4) 2WO4 solution.
4.The obtained (NH4) 2WO4 and then a first evaporation crystallization, to consolidate the effect, in general, the solution and then evaporate the crystallization of ammonium paratungstate will be much higher than the first purity.
The ammonia purification process has simple equipment, high pure tungsten trioxide thermal dissociation method, chemical reagent consumption, low cost, and the purity of WO3 reached 99.995%-99.999%, reached the requirements of high pure tungsten trioxide.
If you have any inquiry of tungsten, please feel free to contact us:
Email: sales@chinatungsten.com/sales@xiamentungsten.com
Tel.: +86 592 5129696/+86 592 5129595
Fax: +86 592 5129797
Scan QR code of Chinatungsten Wechat platform to follow up the daily latest price and market of tungsten, molybdenum and rare earth. 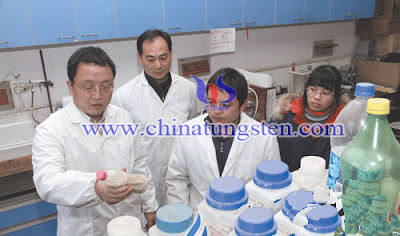 Recently, some scholars believe that guanidine nitrate is an ideal selective precipitant for B. The concentration of guanidine nitrate was 1.063 times -1.068 times, pH7.70-7.79 was 45 minutes, , stirring speed of 120 minutes and other precipitation conditions, molybdenum containing paratungstate B and guanidine nitrate solution in the precipitation process can fully realize the separation of tungsten and molybdenum, and, in the process of transformation, and the recovery of ammonium paratungstate guanidine nitrate preparation at the same time.
After verification, paratungstate B guanidine salt precipitation method has been confirmed as an effective method for separation of tungsten and molybdenum, as to why there is no large-scale application to the laboratory, reason unknown. But good wine is not afraid of deep alley. In the near future, more scholars will further improve the method of B guanidine salt precipitation. Make it easier to popularize.
If you have any inquiry of tungsten, please feel free to contact us:
Email: sales@chinatungsten.com/sales@xiamentungsten.com
Tel.: +86 592 5129696/+86 592 5129595
Fax: +86 592 5129797
Scan QR code of Chinatungsten Wechat platform to follow up the daily latest price and market of tungsten, molybdenum and rare earth. 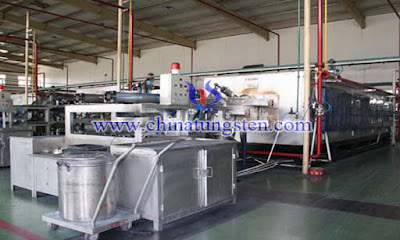 Zinc tungstate (ZnWO4) is a very representative tungstate material. As an efficient photocatalyst, ZnWO4 has excellent catalytic activity, good stability, low energy consumption and no secondary pollution, it has a wide range of applications in environmental protection, water treatment and many other fields. But inevitably, zinc tungstate, like bismuth tungstate, titanium dioxide and other photocatalysts, is easy to agglomerate and difficult to recover in practical applications, therefore, searching for an effective carrier is an effective way to improve photocatalytic performance and reduce the amount of zinc tungstate.
Bamboo charcoal is a three-year-old alpine bamboo as raw material, by nearly 1000 degrees high temperature firing from a charcoal. Bamboo charcoal has porous and porous structure, its molecule is fine and porous, the raw material is easy to regenerate, has strong adsorption ability, can purify the air, eliminate the peculiar smell, is the ideal material to serve as the carrier of zinc tungstate. 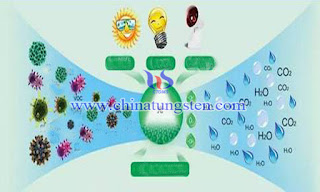 The molar ratio of ammonium paratungstate, zinc nitrate and citric acid was mixed with the molar ratio of 1: 1: 2, and the mixture was stirred in a constant temperature water bath at 85 °C. The dispersed bamboo charcoal was poured into the above solution and stirred for 10 min, and then with 7.28 mol / L ammonia water solution pH = 2.0 ~ 3.0 constant temperature stirring to the solution was gel-like, the sol transferred to the beaker, into the microwave oven, microwave oven power 640 W, microwave 10 min, and then in the box-type resistance furnace at 400 °C for 2 h, remove the grinding, the powder over 100 mesh sieve, that was ZnWO4 / bamboo charcoal composite materials.
After the composite of zinc tungstate / bamboo charcoal composite catalyst showed great photocatalytic activity, some enterprises use composite catalyst degradation rhodamine B, when the content of bamboo charcoal was 20%, the bamboo charcoal exhibited the maximum photocatalytic activity, and the degradation effect reached 92%.
If you have any inquiry of tungsten, please feel free to contact us:
Email: sales@chinatungsten.com/sales@xiamentungsten.com
Tel.: +86 592 5129696/+86 592 5129595
Fax: +86 592 5129797
Scan QR code of Chinatungsten Wechat platform to follow up the daily latest price and market of tungsten, molybdenum and rare earth.

A New Shortcut for Preparing WC-CO Powder from Ammonium Metatungstate

Many scholars have tried new methods to reduce production cost. The direct synthesis of tungsten cobalt alloy powder from ammonium metatungstate is an innovative attempt. 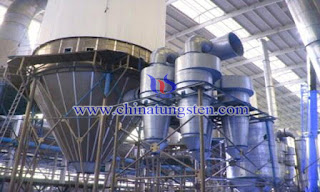 Some scholars using the preparation of ammonium metatungstate by AMT (WO3>92.5%), soluble cobalt salts and ultra pure organic carbon as raw materials, according to the wc-6% (mass fraction) CO composition prepared tungsten cobalt mixed solution, and then the preparation of tungsten cobalt precursor powder in spray drying tower, calcined in N2 atmosphere, finally prepared by in situ synthesis method prepared by direct carbonization of WC-CO composite powder in H2 atmosphere. For the spray conversion, the calcination process uses fixed parameters: the solution concentration is set to 60% (mass fraction), feed rate 2000ml / min, inlet temperature 240 °C, centrifugal speed 12000r / min, low temperature calcination temperature is set to 200 °C; Set the direct carbonization temperature to 800, 850 and 900 °C. In situ synthesis of WC-CO powder by direct carbonization.
On the set of carbonation temperature test found that W at 800 °C began to slow carbonation, with the temperature rise, carbonization speed, to 900 °C, W has been carbonized more complete, under normal circumstances, W need to be carbonized at 1100 °C, but here the carbonization temperature is reduced by 200 °C, the main reason is that CO on the carbonization of W play a catalytic role.
The process of preparing WC-CO powder from ammonium metatungstate was carried out along the W / CO / C → WCO3 · CO6W6C → W2C-CO → WC-CO reaction. The WC-CO composite powder with hollow spherical structure can be successfully prepared, the average particle size is about 30 um, and the hollow sphere wall thickness is about 1.8 um; With the increase of carbonization temperature, the reaction system can be directly generated W2C-CO without further two steps, and then further carbonized into WC-CO composite powder.
If you have any inquiry of tungsten, please feel free to contact us:
Email: sales@chinatungsten.com/sales@xiamentungsten.com
Tel.: +86 592 5129696/+86 592 5129595
Fax: +86 592 5129797
Scan QR code of Chinatungsten Wechat platform to follow up the daily latest price and market of tungsten, molybdenum and rare earth.

At present, the methods of producing high purity APT by controlling impurity content in industrial production are: re dissolution method, ion exchange method, ammonium tungstate method, electrolysis method, recrystallization method, etc.. But because of the different chemical properties of impurity elements, using only one method to achieve the purpose of removing all impurities, so the preparation of high purity APT often need two times of ion exchange, activated carbon adsorption and other means of further purification.
It is found that the following three problems should be paid attention to during the purification of high purity ammonium paratungstate (APT). 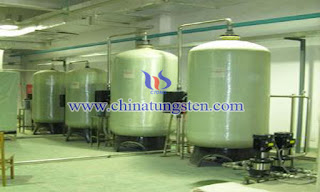 (1). The higher the crystallization rate, the higher the impurity content in APT crystallization. When the crystallization rate is more than 65%, the precipitation of impurities is accelerated, and the precipitation rate of the four impurities is sorted as Fe >M o>P >S. Therefore, the ultra high purity APT should be controlled by controlled crystallization, and the crystallization rate should be controlled within 65%.
(2). Increasing the concentration of WO3 in ammonium paratungstate solution is beneficial to improve the purity of APT. The higher the initial concentration of WO3 is, the less impurity content in APT crystal. The decrease of Mo content in APT was faster than that of P, S and Fe in the ammonium tungstate solution with higher WO3 concentration. The precipitation rate of Fe decreased obviously with the increase of WO3 concentration.
(3) With the increase of crystallization temperature, the impurity content in APT decreased. The reason may be that the solubility of impurities increases at high temperature, and the content of APT crystals decreases. At the same time, homogeneous coarse grains are easily obtained at high temperature, and the impurities in the bulk crystals and homogeneous coarse grains are less.
If you have any inquiry of tungsten, please feel free to contact us:
Email: sales@chinatungsten.com/sales@xiamentungsten.com
Tel.: +86 592 5129696/+86 592 5129595
Fax: +86 592 5129797
Scan QR code of Chinatungsten Wechat platform to follow up the daily latest price and market of tungsten, molybdenum and rare earth.

Tungsten trioxide is a transition metal oxide, with a semiconductor character, has great potential for gas-sensitive materials, sensitive to a variety of gases, especially toxic gases.

In recent years, with the emergence of nanotechnology, it was found that nano-tungsten trioxide has a higher sensitivity and response speed. There are three main methods for preparing nano tungsten trioxide, gas phase method, liquid phase method and solid phase method. In general, hydrothermal method has become the most widely used method for the preparation of nano WO3 by virtue of its economical, low cost and easy operation. 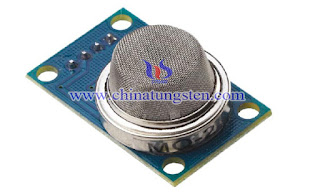 Commonly used to produce gas-sensing elements of tungsten trioxide mainly nanorods, nano-plate, nano-plate rod-like mixed structure and other forms, as will eventually become what form, are generally in the process of hydrothermal synthesis by adjusting the parameters formed by the results, therefore, even with the same hydrothermal method of nano-tungsten trioxide, often because of different regulators, the temperature is different, and makes the operation of a wide variety of the final nano-structure is also different.
Some scholars use water from tungsten trioxide thermal method, in order to verify the gas sensing properties of the above-mentioned three kinds of structure, using citric acid as acidifier, ammonium metatungstate will be mixed and sodium sulfate, were dissolved into distilled water, according to a certain percentage of the mixed solution by adding citric acid, by adding the amount of citric acid to adjust the reduction of rod, plate, plate-like mixed structure of three kinds of structure of nano-tungsten trioxide.
Through the test of the three structures, the following conclusions are obtained. The specific surface area of BET of nano plate, nano plate rod and nano rod WO3 is 17.55 m2/g, 11.01 m2/g, 10.57 m2/g, respectively, it can be seen that the specific surface area is nano plate > nano plate rod > nano rod. It can be said that the specific surface area is the key to determine the sensitivity of nano-tungsten trioxide, so the results will be clear at a glance.
In the atmosphere of three acetone, the same concentration of ammonia and formaldehyde, gas sensing properties of tungsten trioxide nano plate is the best, this is mainly due to the nano tungsten trioxide plate has a high specific surface area, can significantly change the effective resistance of the crystal and increase the active site of gas reaction. For gas sensitive reactions, the more active sites of metal oxides are, the more sensitive the gas sensitivity is, and the selectivity and sensitivity of gas sensors are higher.
If you have any inquiry of tungsten, please feel free to contact us:
Email: sales@chinatungsten.com/sales@xiamentungsten.com
Tel.: +86 592 5129696/+86 592 5129595
Fax: +86 592 5129797
Scan QR code of Chinatungsten Wechat platform to follow up the daily latest price and market of tungsten, molybdenum and rare earth.