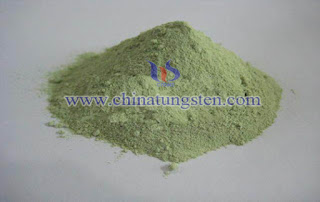 In recent years, nanotechnology has developed rapidly with many active researches. When entering the nanoscale, the particles has quantum size effect, surface effect and macroscopic quantum tunneling effect, making the material exhibit unusual physical and chemical properties. WO3 is an important functional material, widely applied in aspects of electrochromic, toxic gas detection and photocatalytic degradation. In 1994, Makarov and Trontelj found WO3 doped Na2CO3 and MnO2 has an obvious nonlinear I-V characteristic, which indicates WO3-based functional materials have the potential being applied to the varistor.

The electrical properties of tungsten oxide functional ceramics and WO3-based ceramics doped low metal elements and rare earth elements have been studied that there is a certain non-linear characteristic no matter WO3 ceramics doped or not, and the doping process can change its non-linear coefficient. But most researches on tungsten trioxide functional ceramics use micron WO3 as raw material, common electronic ceramics preparation process, focusing on changing the doping elements and proportions, observing the effects on the electrical behaviors, and there are few reports about Effect of changing the sintering process on tungsten trioxide-based functional ceramic electrical behaviors.
时间： 三月 30, 2016 没有评论:

Cesium is a golden yellow metal, low melting point active metal, easily oxidized in air and can react violently with water to produce hydrogen and even explode. There is no elemental form of cesium in nature, cesium minimal distribution in the ocean in the form of cesium salt. Cesium tungsten bronze is widely used because of its low resistance, excellent visible light transmittance, near-infrared shielding properties. Also it is widely used in preparing conductive thin film, since being the glass transparent insulation coating as insulating agent, it has excellent properties like low resistance, excellent visible light transmittance and near-infrared shielding performance. The article provides a method that using ammonium paratungstate and cesium nitrate as raw materials to produce Cesium-tungsten oxide ultrafine powder, the specific steps are as follows:

1. Weighing the cesium nitrate, ammonium paratungstate by the molar ratio of Cs/W being 1: (1.5 to 2.8), and adding chelating agent and alcohol reagent, reacting at 170°C for 3 hours;2. Loading the mixture obtained in step 1 in a pressure vessel shells, raising the temperature to 260~270°C for reacting for 5 to 8 hours;3. The reaction obtained in step 2 is carried out alcohol washing, centrifugation; then dried in the conditions of 80°C in vacuum, thus to generate complete crystalline cesium-tungsten powder.Using this method to prepare cesium-tungsten oxide ultrafine powder has many advantages, such as: saving the materials, thus to save costs; shorten the preparation period, make it advantaged for industrial production; products prepared are ultrafine powders with a very low resistance.
时间： 三月 30, 2016 没有评论:

Under certain conditions the six-phase tungsten oxide（h-WO3）can exist in stable form. When annealing temperature exceeds 400℃, it can turns into monoclinic system（γ-WO3）. Nano tungsten oxide applied in electric and optical field is different from tungsten oxide bulk. The main differences are phase transition temperature drops evidently, so sometimes orthorhombic tungsten oxide（β-WO3）appears and is stable under room temperature. 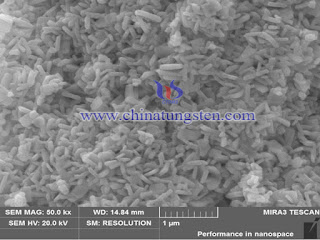 At present, 50 to 60% of the world's tungsten is used for the manufacture of tungsten carbide. Among them, rock drills in mining tools, ...